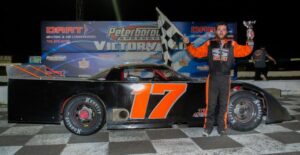 With Brandon Passer and John Owen on the front row, teams had 50 laps to settle the score on the popular Central Ontario speedplant. Passer shot out to an early lead on the initial green flag, with Owen and multi-time Peterborough winner Glenn Watson hot on his tail. John Cadman Jr. and Dario Caprichio joined the lead trio to create a 5-car breakaway around the same time as the race’s first caution flag waved to slow the pace.

With the green back out, Passer picked-up where he’d left off but now had Watson on his back bumper and Owen in 3rd. The driver of the No. 22 car threw everything he had at the leader but couldn’t take the position away. The 3 veterans were now a few car lengths ahead of the 4th and 5th place cars.

Another yellow flag – that turned into a lengthy delay as track crews worked to clean up a fluid spill that went all the way around the racing surface – put everyone back together. A few laps after the restart, Watson slipped a little in the 2nd turn and that was all the invitation Cadman needed to steal away the runner-up spot, with Owen taking away 3rd with a lap 21 pass. The leaders caught the tail-end of the field near halfway and that’s where things got interesting. Even though the backmarkers were fighting for their own positions in the running order, the frontrunners managed to work through the traffic.

Caprichio had a pair qualifying heat wins, with Watson and Campbell taking the others.

Ontario Outlaw Super Late Model Peterborough Speedway notes: Marlie Owen – a Peterborough Speedway regular who has been running with the APC Super Stock Series – made the show in her father’s red car, while John Owen wheeled the black one. Her performance received some positive comments from other drivers in the field. 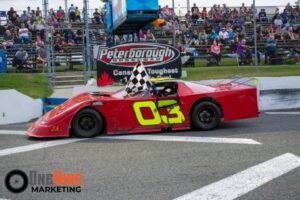 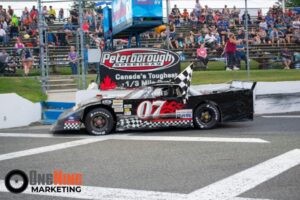 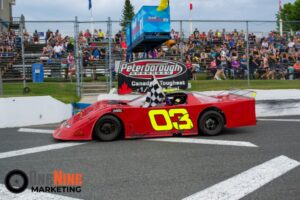 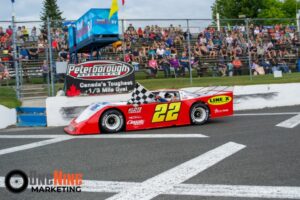