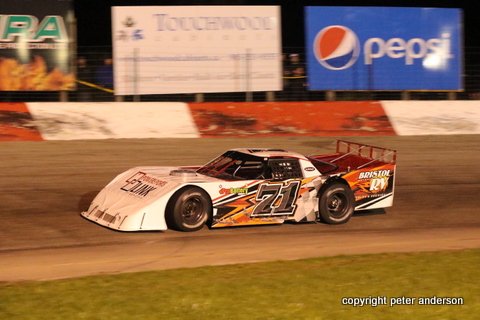 MILLGROVE, Ontario — Running inside the top-three from the drop of the green flag, John Cadman was able to take advantage in 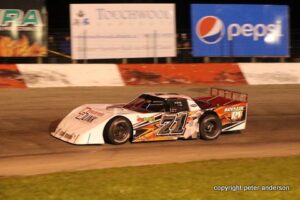 the final laps and win the Frostoberfest feature for the Ontario Outlaw Super Late Models at Flamboro Speedway.

Passer would take the early advantage off the drop of the green flag, with Watson and Cadman falling in line closely behind. It’d be a small gap back to Capirchio, who was able to get ahead of Jackson for fourth, as Miller held sixth in front of Owen.

Passer would look to have things in control, poised to possibly repeat his success from earlier this year at Peterborough Speedway, 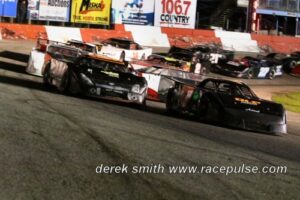 when it all began to fade away in a matter of four laps. He would be passed for the top spot on Lap 10 for Watson, with Cadman falling suit. Passer then began to slow four laps later, with the caution coming out as the motor expired on the No. 17 Super Late Model.

A star-studded front row restart would see Watson move ahead of Watson, as Capirchio and Jackson fell in line not far behind the 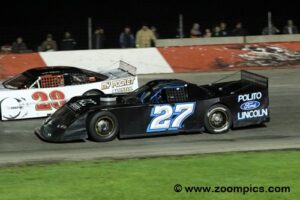 leaders ahead of Wilkinson, Miller, Owen, Burrows, and Monaghan.

Although Watson held down the advantage all the way through to the halfway mark of the event, he was unable to get away from the field with Cadman closely stalking him. Each time through the corners, Cadman would peek the nose below Watson, looking for a way by for the top spot.

Cadman made his move on Lap 41, getting underneath Watson. As the pair ran side-by-side, Watson got loose on the outside in turn 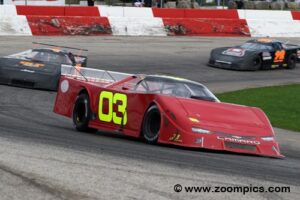 four, with a tap from Capirchio sending the No. 22 Super Late Model spinning into the infield grass. As Watson sat there, Miller would follow suit with a spin on his own the following lap, bringing forth the second yellow flag at Lap 42.