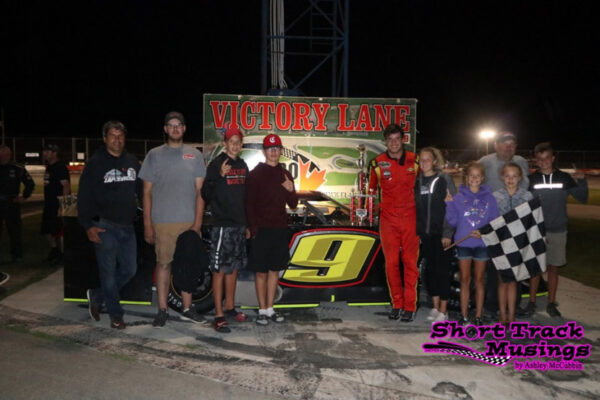 HAMILTON, Ontario — No matter what he is behind the wheel of, Cayden Lapcevich has shown he can get the job done. He did just that on Saturday night at Flamboro Speedway, dominating the Ontario Outlaw Super Late Model Series presented by the Canadian Concrete Expo’s Don Biederman Memorial.

John Cadman won the first heat ahead of Glenn Watson, Chris Burrows, Roy Passer, and Mike Miller. Cayden Lapcevich crossed the finish line in second, but was disqualified in post-race technical inspection due to weight.

The drop of the green flag saw a battle for the lead between Capirchio and Robinson, with Capirchio grabbing the top spot on Lap 3. Watson would move up into second, challenging Capirchio for the lead two laps later, but was unable to make the pass. Cadman ran third ahead of Lapcevich, Robinson, Richardson, Foster, Burrows, Miller, and Passer.

Lapcevich continued to make his way forward, moving up into the second spot by Lap 15 ahead of Watson, Cadman, Robinson, Richardson, Foster, Burrows, Miller, and Passer. Lapcevich’s climb to the front would be complete by Lap 21, as he’d take the top spot ahead of Capirchio, with Cadman getting around Watson for third. Further back, Passer would also make his way around Miller for eighth.

The race would not go green to checkered, with the caution coming out on Lap 30 for Capirchio having a mechanical failure and stopping in turn two.

Lapcevich got a good restart to keep the lead with Cadman second, as Watson and Robinson battled for third. Watson got the spot on Lap 32 ahead of Robinson, with Richardson rounding out the top-five ahead of Foster, Burrows, Miller, and Passer. Unfortunately, Foster’s run came to an end on Lap 37 as he would head pit side following contact with the wall.

There would be passing right to the checkered flag, as Robinson caught back up to Watson in the closing stages, passing him with four laps to go for third.